Location: Located in the northwestern region of the Department of La Paz, in the provinces of Franz Tamayo, Abel Iturralde and Larecaja. The municipalities involved are Apolo, San Buenaventura, Ixiamas, Pelechuco and Guanay. Bordered on the west by the Republic of Peru.

Biogeographic subregions, altitudinal range and weather: The Madidi corresponds to Puna subregions, Yungas Montane Wet Forest and Rainforest of Madeira. The weather varies from cold in the Andes, to warm in the northern lowlands. The altitudinal range between 200 (low area near Rurrenabaque) and 6,000 masl; physiographic environments: high mountain ranges in the Amazon basin Apolobamba to Heath River, a diversity gradient in mountainous regions and Subandino system.

Fauna: There are 733 species of fauna recorded, which are mammals, birds, reptiles and fish. Among mammals highlights the jucumari or spectacled bear, Andean cat or squirrel, or deer Brocket Andean puma, jaguar, tigrecillo, drover, londra, spider, manechi. Among birds crested eagle, tunqui, harpy, hummingbird endemic. Until now it has been identified 620 species of birds and it is estimated that there up to 1,100 species, extraordinary figure to represent 90% of the avifauna of Bolivia. The monkey "lucachi" a new species to science, hidden in the rain forests of Madidi National Park, is a golden-haired monkey, unknown to science until 2004, when it was discovered they held an auction to raise funds for conservation and finally naming him Callicebus = Golden Palace. 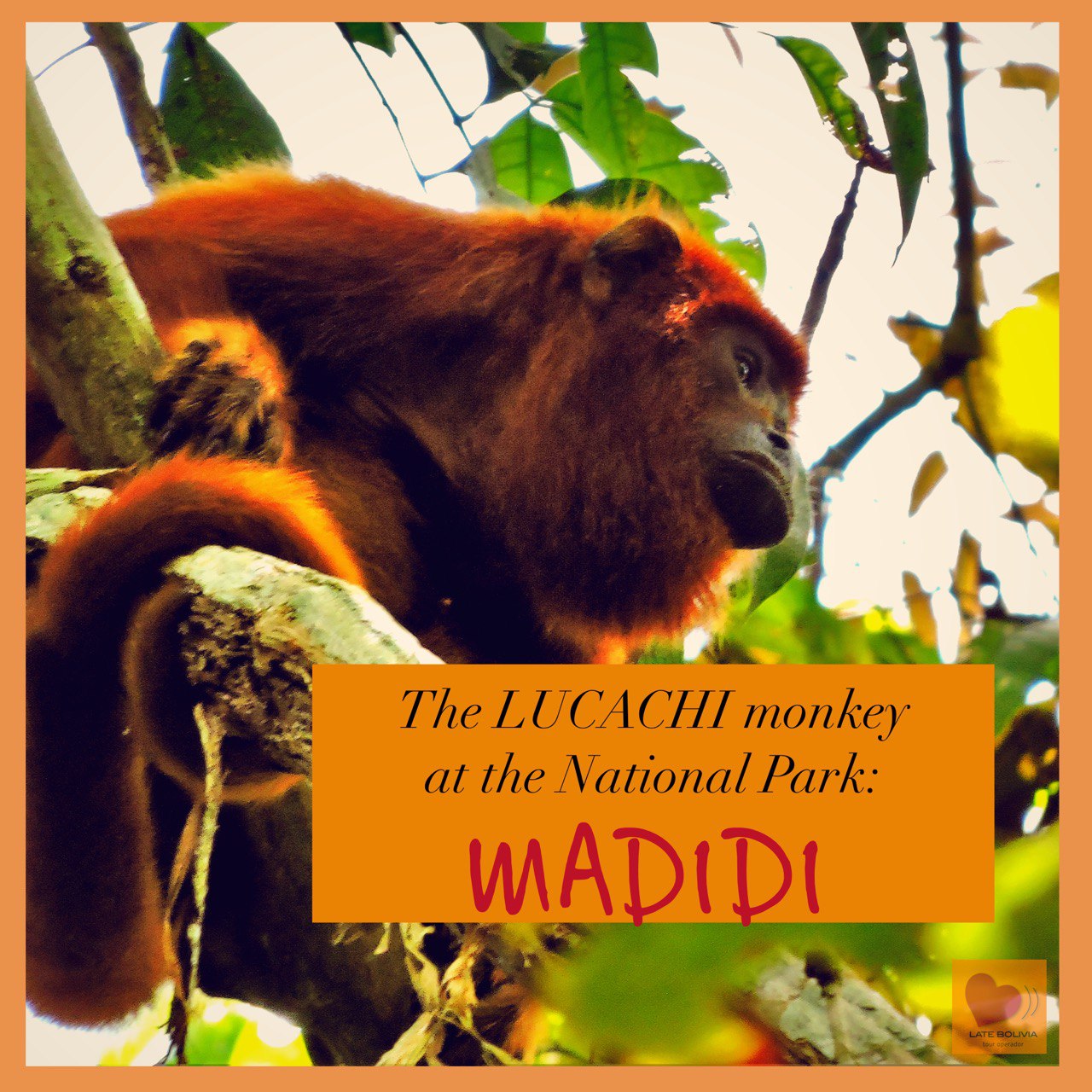 Local population: There are three communities in an area of ​​very difficult access (the highlands at more than 3,000 masl), a total of about 180 families of Quechua origin. In the intermediate mountainous region (from 3,000 to 600 masl) there are around 25 small communities; at the North of Apolo and Northwest of Asariamas, towards the border with Peru, there are 370 families. In the lowlands population is very scarce, located in few small communities and in some scattered settlements, the communities are located towards the Beni River (El Carmen, San Miguel, Quendeque and Bala) and towards the North of the lowlands on the Tuichi River San José de Chupiamonas is located, a total of about 120 families. The population of the lowlands is essentially: Tacana, Esse Eja and Mosetén. The urban centers near Madidi Park are: Apolo (1,628 inhabitants), San Buenaventura (1,670 inhabitants) and Rurrenabaque (4,959 inhabitants) to the East, and Ixiamas to the North (1,256 inhabitants).

How to get to the Madidi Park?

The entry points are Apolo to the South and Rurrenabaque to the East. Both locations are accessible by land via buses that leave daily from La Paz (Villa Fátima) or from Trinidad and Rurrenabaque. The local airline Ecojet offers flights to to Rurrenabaque.